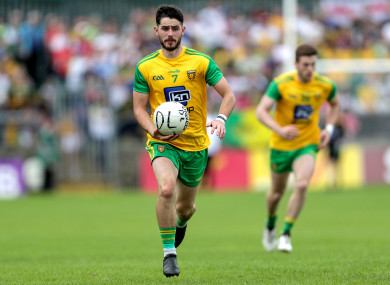 “Our brain is really who we are. In this society, in this time, if your brain has been altered, you have been fundamentally altered.”

What is a concussion?

Ryan McHughs piece in the Irish Independent a number of weeks ago got us thinking here at On The Ball Team Building about concussion and the management of it. We have decided to provide our readers with some information surrounding concussion. Information is taken from some research our founder Jamie Finn carried out a number of months around Concussion Management in Irish Rugby.

Concussion is a traumatic brain injury (TBI) and is regarded as being a complex physio pathological process that affects the brain. A concussion occurs from a direct blow to the body or head resulting in an impulsive force being sent to the brain.

Those that are exposed to repeated head trauma may develop Chronic Traumatic Encephalopathy (CTE). It is scientifically identified by a build-up of abnormal tau protein in the brain that can disable neuropathways. This can lead to numerous clinical symptoms, such as increased levels of aggression, depression and impulse control issues. The frightening aspect of concussion is that the loss of consciousness is not required for an individual to be concussed; in fact 90 percent of concussions do not result in loss of consciousness.

The subjective nature of concussion results in athletes failing to disclose symptoms to the medical staff in order to remain on the pitch. This is a considerable problem in high-impact sports. There is no denying that head injuries are an inherent risk for the participants in contact sports. There are the situational risks which are inherent within the sport and subsequently emerge from matters such as the facilities and equipment. Similarly there are the event-based risks which exist only at specific points in time and occur because of a particular set of circumstances such as the manner in which a player is tackled.

Despite advancements in sports medicine, CTE remains one of the least understood injuries in the sports medicine world. The inability to diagnose CTE in a living person (diagnosis can only be done through an autopsy) is a major reason for such confusion around the topic. Parkinson’s disease, dementia and clinical features which resemble Alzheimer’s are some clinical features associated with CTE. Furthermore, alterations in mood, personality and behaviours are often key factors during the initial phases of CTE. These symptoms are non-specific and “can be associated with a variety of neuropsychiatric disorders or even transient responses to significant life events” (McAllister and McCrea 2017 p. 312).

How can you manage a concussion?

Physical and cognitive rest are essential for the management of concussion due to the possibility of the recovery process being delayed if one were to return to either physical or cognitive activity too soon. If a player receives a second concussion prior to the symptoms of the first concussion being resolved, it is known as Second Impact Syndrome. It is a worrying consequence of sports- related concussion as the possibility of death is largely increased.

The manner in which Ryan McHugh, Donegal footballer, was managed is positive and does provide me with optimism about how concussion is being managed in our native game. It is interesting to hear how he is thinking of altering his game in an attempt to reduce the possibility of receiving additional concussions. One of the biggest issues I discovered when researching this thesis was the lack of communication between different sporting activities.

Let’s say an individual sustains a concussion while playing rugby, could in fact compete in a hurling game a few days later despite not being able to play rugby for 3 weeks, as per IRFU GRTP protocols. Although, in a lot of scenarios parents would inform the management of the other sport but what if the parents don’t? Or what happens if an adult sustains a concussion in one sport but hides it from the manager of another sports for fear of losing his/her place on the team?

Yes, people will argue in adult sports it is the player’s responsibility not to play and to inform the management. This is something that I do not agree with simply due to the fact that some players will not mention a thing for one of two reasons:

This is where communication between coaches of all sports is critical, as failure to communicate could leave the player prone to sustaining long-term damage while playing another sport. A centralised communication framework is required which takes away the potential for non-disclosure from players.

The most frightening aspect of concussion is that it “comes with no physical signs of damage”. McHugh has sustained a number of concussions and blows to the head over the past number of months which led him to consider altering his playing style. As players are getting faster and stronger in addition to a shift towards a more professional game will we see the number of concussions in the GAA increase or decrease? Will we see players changing their style of player to reduce the risk of sustaining a concussion?

When players livelihoods are dependent on their performance which means they have to be on the field of play they are more likely to refrain from speaking out if they sustained a concussion. The gap of knowledge that exists between the view of the experts and laypeople is a significant hurdle that sporting organisations must surpass. Failure will result in similar circumstances as retired American football players sustaining CTE in the later stages of their lives. Players need to be informed of the symptoms of concussion and the risks faced of playing on when concussed or not adhering to the required return to play protocol. Concussions are not something to be ignored and playing on when concussed shouldn’t be considered as a badge of honour.