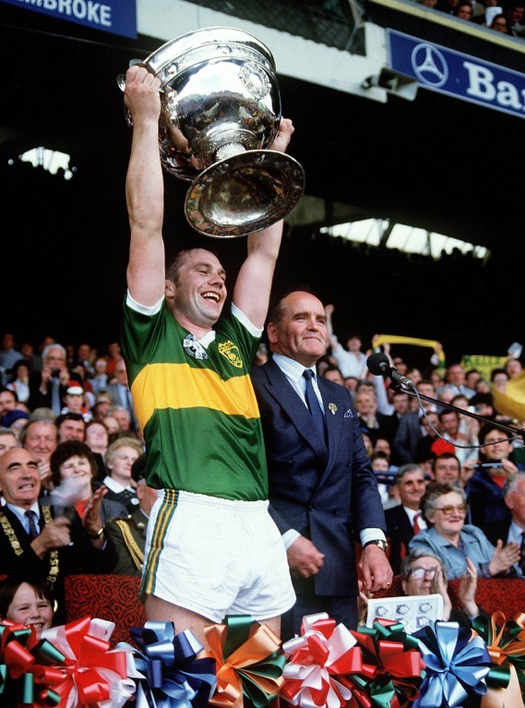 Perhaps this is one of the most iconic motivational speeches in GAA history. One would have to thank RTE for giving the public access to such an historic year for the county of West Meath winning a Leinster title. It was their first one ever and haven’t won one since. Paidí O Sé (or PIO) as he was known in Kerry took charge of the Lake County shortly after finishing his role as manager of Kerry. This documentary gave us such memorable quotes that will live in peoples’ memories for decades to come.

To put some context to this quote for those who haven’t seen the documentary:

A late score from Laois forced a replay and caused low morale in the West Meath camp. Páidí was faced with the task of instilling confidence and belief back into his players in order to get over the line and win the Leinster Final replay.

“A grain of rice will tip the scales”

This simple anecdote is relatable to numerous walks of life.  To some “a grain of rice” may seem to be completely insignificant, worthless and hardly something that would make a difference. Yet one “grain” could tip the scale-one word of encouragement, one prayer or one word of gesture of kindness could be the significant factor.

In Kerry, football is treated similarly to religion and runs through every ones blood. The passion shown by O Sé personified the culture in Kerry. Everyone who had crossed paths with Páidí had their own unique story-a true Gael, an icon of the GAA. Not only did he win eight All Ireland medals and captained the county in 1985 he was the man to end the eleven year famine of Kerry football between 1986 to 1997. He also brought so much joy to the people of Kerry, West Meath and beyond through his years as both a player and manager.

Páidí was seen as not only being a fantastic footballer who dedicated his life to Kerry but also as an incredibly intelligent manager. He was one of the few people to have succeeded in claiming All Ireland honours as both a manager and player. Páidí’s warmth for both the Irish language and culture were qualities of a man who was immersed in the area he called home. This was evident when he brought celebrities from near and far to visit his bar at Ard a Bothair. Having been Ireland’s most westerly pub this was not a barrier to its success.

Victory in 1985 was Páidí’s seventh All Ireland medal and as captain provided him the opportunity to have the Sam Maguire cup back in Ard a Bothair. His emotional speech underneath the Hogan Stand was one of the greatest to date. Dingle Peninsula was lit up with bon fires as they welcomed Páidí. He was the first All-Ireland winning captain the peninsula had since Paddy Kennedy of Annascaul in 1946. Páidí again as player/coach was successful on getting West Kerry to retain their County Championship in 1985. This time his county and divisional teammate Tommy Doyle of Annascaul was appointed captain. Victory over Tyrone in the 1986 final ensured that Sam Maguire would stay not only in Kerry but in Chorca Dhuibhne for another year. Over thirthy years later people are still reminiscing on the nights of celebrating they had welcoming Sam to Ciarraí Thair.  The 1986 win was Páidí’s eighth and put him into a selected club with Denis ‘Ogie’ Moran and Pat Spillane.

Páidí set up the Comórtas Peile Páidí Ó Sé in 1989, which was an idea of creating a unique Gaelic Football concept, in a magical part of Ireland. This is a competition that has grown significantly since its inception and is a credit to its founder. Over the past few years it is estimated that somewhere in the region of 2000 people descend on the Dingle Peninsula to take part in the tournament annually.  It is growing from strength to strength and is a must for GAA teams to attend. It provides a good indication of how pre-season is going for teams and is significant in forming friendships.

Perhaps the following is the most fitting way to conclude: